How the Czech Republic slipped into a Covid disaster, one misstep at a time 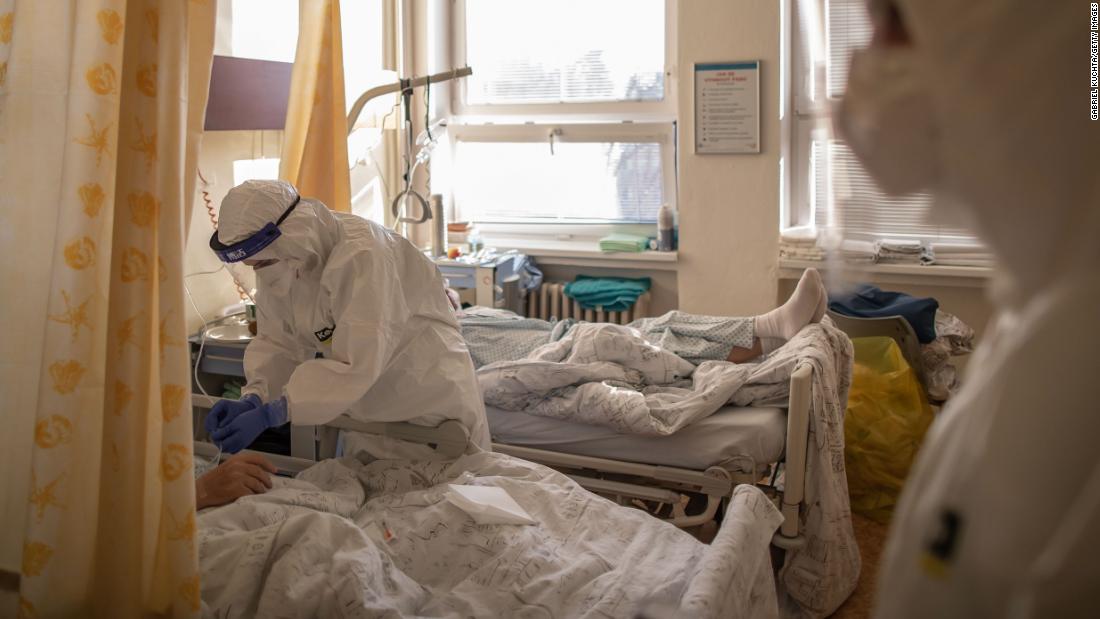 Instead, the current Czech catastrophe is akin to death by a thousand cuts, a result of dozens of tiny missteps, late decisions and botched public health messages, experts tell CNN.

On Friday, the government conceded it had no other choice but to impose a very strict lockdown starting Monday, just as much of the rest of the world is starting to talk about easing.

“The government has adopted an unfortunate strategy of making decisions based on the current hospital capacities, which means they often come too late,” said Jan Kulveit, senior research scholar at the Future of Humanity Institute, a multidisciplinary research institute at the University of Oxford, in England.

He said the number of patients in hospitals paints a delayed picture of the epidemic, because people tend to end up needing medical attention some time after getting infected.

“There is a huge difference between adopting the measures on time and waiting 10 days. A delay of 10 days, when the reproduction number is 1.4 means a doubling of the epidemic,” he said.

The Czech government has not responded to a request for comment. Speaking in the Parliament on Friday, Prime Minister Andrej Babiš admitted his government has made “far too many mistakes,” but said it was not the time to argue about the past.

Explaining the need for the new lockdown, he said: “I understand it’s hard, but it’s very important … we need to do this together and I hope everyone will understand and give us one last chance so that we can manage this together.”

Too little, too late

Dr. Rastislav Maďar, the dean of the University of Ostrava’s medical school and one of the country’s top epidemiologists, points to three decisions as the root cause of the current crisis. The first came when the government overruled its own advisers, including Maďar himself, and refused to reinstate a mask mandate in the summer; the second when it decided to reopen shops ahead of Christmas; and the third when it failed to react to the new variant popping up in early January.

“These were the three big errors and right now, we are just praying there won’t be a fourth one,” he said.

Maďar has a personal connection to the crisis. As the former coordinator of the government’s coronavirus restrictions advisory group, he resigned after Babiš overruled the group’s call to make masks mandatory when the epidemic showed signs of strengthening in late August.

The pushback against masks came just as the government decided to reopen schools at the beginning of September. “This led to the increased mobility of roughly 2 million people, and [the epidemic] exploded,” Maďar said.

Politics likely played a part in the decision making. “This was the moment when the epidemic started to spread again, but there was still time to stop it … but it didn’t happen, because there was an election coming up,” said Dagmar Dzúrová, a demography professor and the deputy head of the Department of Social Geography and Regional Development at Charles University in Prague.

Dzúrová is not the only expert pointing to the early October vote as a key moment in the battle against the virus. “Many European countries experienced a second wave, the Czech Republic wasn’t unique in that,” Kulveit said. “But unlike other countries, it didn’t manage to suppress the second wave, and I think the election played a role in that,” he added.

Babiš argued the restrictions were costly and unpopular, but said his decision was not motivated by the election. When pressed on the masks issue in Parliament, Babiš accused the opposition of politicking, saying “the regional election was the worst thing that could happen to Covid-19.”

“The opposition was keen to capitalize on this too, criticizing the measures, calling face masks ‘muzzles’ and questioning why we should wear them when the case numbers are still low,” Maďar said. “The problem of course is that we cannot react to the numbers we are seeing right now, because if we do this, we are two weeks too late,” he added.

The government’s reluctance to act meant the epidemic got out of control.

By late October, a hard lockdown was inevitable. Babiš was forced to admit he and his government had made mistakes in handling the outbreak and pleaded with people to follow strict lockdown rules. “I could not imagine that this would happen,” he said at the time.

But another error came soon. As infections started to decline and with Christmas just around the corner, the government became impatient and decided to ignore its own data-based rules on how to reopen safely. The PES system was introduced in November and was meant to determine the government’s next steps based on the epidemiological situation; any easing was meant to be backed by data. The risk level was determined by a number of factors, including the reproduction number, the positivity rate and the number of infections per 100,000 people. “They didn’t follow their own rules, the system was telling them something and they ignored it,” Kulveit said.

“They didn’t withstand the pressure and agreed to start lifting some restrictions so that people could go out and do their Christmas shopping, despite the fact that infections were still higher than when the lockdown was imposed,” Maďar said. Easing over Christmas led to a surge on top of a surge, and another lockdown just after the Christmas holidays.

The politicking didn’t end with the close of the polling stations, experts told CNN, mostly because another key election is coming this year. “We are already in an election campaign time and that is lowering the willingness of the political parties to find consensus,” Kulveit said.

“The government isn’t listening to the experts and is dealing with the pandemic based on its political needs and when the measures are being explained to the public, it’s done by politicians, mostly by the Prime Minister, which means that a part of the public is prone to boycott the rules for political reasons,” Dzúrová said. She pointed to countries like Germany where politicians mostly leave it up to the experts to communicate with the public.

Babiš has mostly dismissed the criticism that experts — not himself — should be the ones communicating with the public. “Over the summer, we had so many experts that people didn’t know what is true,” he said in the Parliament.

Another problem with the Czech approach, Dzúrová said, is a lack of meaningful financial support. This has led to low compliance of the rules among those who simply cannot afford to obey them. For example, people told to quarantine are entitled to just 60% of their average salary, which is paid by their employers in the first two weeks. And while businesses are entitled for compensations, a number of industry bodies have criticized them as inadequate.

Enforcement has been a problem too, Maďar said. “People are tired, they are meeting up privately, hosting parties, traveling into the mountains, there’s a backlash against the police, which cannot do much anyway,” he said.

With the government’s message increasingly muddled by politics, disinformation started to spread. “Again, this is not unique to the Czech Republic, but there seem to be more people who believe in conspiracy theories and think the risk from the virus has been overblown,” Kulveit said.

This has distorted reality, Kulveit believes. “Of course there are debates going on in the expert circles, but if you look at the field of epidemiology, some 95% of experts agree on the consensus and then you have perhaps 5% who dissent, but in the media, this is presented as 50:50, and then on social media, it could become 20:80,” he added.

Victims of their own success

The Czechs might be more prone to trust conspiracy theories because their country went through the first wave of the pandemic relatively unscathed, thanks to an early decision to lock down.

In public health, this is known as the paradox of success. When preventative measures work well, the public might underestimate the severity of the threat and come to believe the prevention was a waste of time.

“People saw the cost of the measures but not the virus, so there was a huge spike in the voices doubting the seriousness of the disease and of the situation and that is not something you would see in a country that has experienced thousands of deaths,” Kulveit said.

The Czechs are not unique in becoming victims of their own success, but the government’s inability to explain the issues is making the situation worse, he added. The government has launched a coronavirus information campaign, but it focused mostly on the restrictions and, more recently, vaccinations.

The current crisis in the Czech Republic is partially down to the new, more infectious variant of the virus first identified in the UK.

Dzúrová and Maďar said the country didn’t pay enough attention to the new variant, not sequencing enough samples to figure out how widespread the new strain was and how to stop it from spreading across the country. This is something the UK managed successfully in January, with a combination of very strict lockdown measures and intensive sequencing work. By the time the Czechs started sequencing, the UK variant was dominant.

“The measures that are in place right now are strong enough to suppress the original variants of the coronavirus, but not the new, more infectious variants,” Kulveit said. He, Dzúrová and Maďar have all urged the government to tighten the restrictions as soon as possible, to bring the infection levels down.

The country is currently in a softer lockdown compared to some other countries, including the UK. Schools are closed apart from the first two grades of elementary education. Non-essential shops are mostly closed and restaurants are open for takeout only.

Starting Monday, the restrictions will tighten. People won’t be allowed to leave their homes for other than essential reasons and even the youngest children will switch to remote learning. Traveling between regions will be banned.

But according to the experts, the government is making a big mistake by refusing to shutter factories. “The new variant changes the rules of the game. Factories are open and people are traveling to work on public transport, and this could lead to collapse of the health care system,” Maďar said.

The country’s main trade unions also called for industrial production and manufacturing to be halted, but the government argued such move would be far too costly. The sector makes up about 40% of the Czech GDP.

“I fear that big part of the Czech public still doesn’t understand how bad the situation is and what is truly horrifying is that some people seem to have accepted the fact that we are seeing 100, 150 people die unnecessarily each day, and they don’t see it as something that’s alarming, but as something that is natural and inevitable, when in fact it is a complete tragedy,” Dzúrova said.