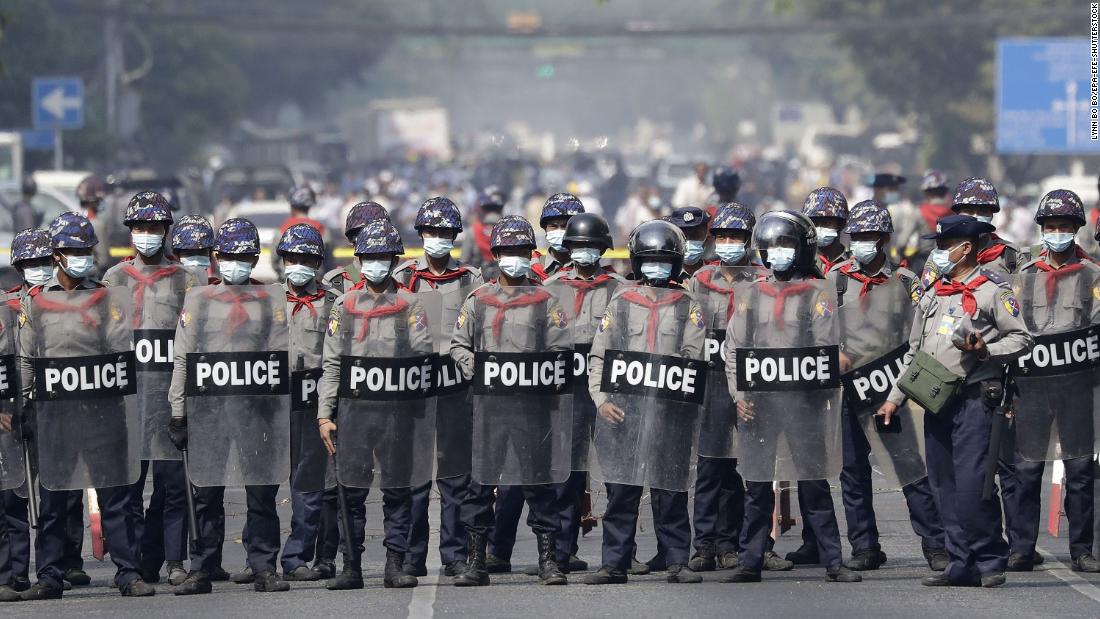 The reported casualties make Sunday the deadliest day since the military seized power on February 1.

As demonstrations against the military coup which ousted the democratically elected government of civilian leader Aung San Suu Kyi entered their fourth week on Saturday, security forces began a violent crackdown on protesters in towns and cities across the country.

The UN Human Rights Office said it had received “credible information” about the use of deadly force against peaceful protesters in “several locations” in Myanmar on Sunday.

“Deaths reportedly occurred as a result of live ammunition fired into crowds in Yangon, Dawei, Mandalay, Myeik, Bago and Pokokku,” a statement from spokeswoman Ravina Shamdasani said. It also noted reports about the use of tear gas, flash-bang and stun grenades.

CNN has been unable to independently verify those claims.

The statement condemned the “escalating violence” and urged the military to “immediately halt the use of force against peaceful protesters,” noting that “the people of Myanmar have the right to assemble peacefully and demand the restoration of democracy.”

“These fundamental rights must be respected by the military and police, not met with violent and bloody repression,” Shamdasani said.

The office also said police had detained at least 85 medical professionals and students, along with seven journalists during the demonstrations on Sunday, noting that more than 1,000 people had been “arbitrarily arrested and detained” in February, including “members of the democratically elected government.”

The statement repeated the UN’s call for the release of anyone detained arbitrarily. “The international community must stand in solidarity with the protesters and all those seeking a return to democracy in Myanmar,” it said.

In the biggest city, Yangon, a protester was fatally shot when police opened fire on demonstrators, according to Reuters, citing a hospital doctor. The doctor, who asked not to be identified, said the protester was brought into hospital with a bullet wound in the chest. Local media outlet Mizzima also reported the death in Yangon’s Thingangyun township.

Also in Yangon, a woman died of a suspected heart attack after police broke up a teachers’ protest with stun grenades, according to Reuters who cited the woman’s daughter and a colleague.

In the south of the country, three people were killed and more than a dozen were wounded when police opened fire on protesters in the town of Dawei, according to media outlet the Dawei Watch. Local politician Kyaw Min Htike confirmed police had shot protesters in Dawei.

Local media outlet Myanmar Now reported two people had been killed in a protest in the second-largest city of Mandalay, according to Reuters.

Police and the spokesman for the ruling military council did not respond to phone calls seeking comment.

In footage from the Hledan district of Yangon, shots could be heard. Local media reported that at least five people were injured in those clashes. ​Shots could also be heard in a live stream posted on social media by local media from Yangon’s Tamwe township, in which crowds of protesters could be seen fleeing from police. At least five students were arrested at protests elsewhere in downtown Yangon on Sunday.

Sunday marks the second day of the military’s intensified crackdown on anti-coup protesters, in which hundreds of people have reportedly been detained, including journalists. In towns and cities across Myanmar on Saturday, security forces fired tear gas, rubber bullets, water cannon and shot their guns into the air to disperse protesters.

An activist group, the Assistance Association for Political Prisoners (AAPP), said that as of Saturday, it had documented 854 people who have been arrested, charged or sentenced since the February 1 coup. The group noted, however, that “hundreds of people” were arrested in Yangon and other places on Saturday.

One police officer has been killed since the coup, according to Reuters.

The latest clashes came a day after the ruling military junta fired the country’s United Nations ambassador for making an impassioned plea at the UN General Assembly for international action to help overturn the coup.

On Saturday, state television MRTV announced UN ambassador Kyaw Moe Tun’s removal, saying he had “abused the power and responsibilities of a permanent ambassador” and that he “betrays the country.”

Speaking to Reuters following his firing, Kyaw Moe Tun said that he “decided to fight back as long as I can.”

Addressing the assembly in New York on Friday, Kyaw Moe Tun defied the military rulers now in control of the country and urged the UN Security Council and the world to use “any means necessary” to rescue the people of Myanmar and hold the military to account.

“We need further strongest possible action from the international community to immediately end the military coup, to stop oppressing the innocent people, to return the state power to the people and to restore the democracy,” he said.

Kyaw Moe Tun said he was delivering the speech on behalf of Suu Kyi’s government, which won a landslide in the November 8 elections. Suu Kyi has now been detained alongside other government leaders including President Win Myint.

In a show of defiance, the ambassador also flashed the three fingered “Hunger Games” salute used by protestors on the streets of Myanmar and adopted from recent protests in neighboring Thailand.

The diplomat received a rare round of applause from his UN colleagues at the end of the speech. The new US ambassador to the UN, Linda Thomas-Greenfield, praised the envoy’s “courageous” remarks.

“The United States continues to strongly condemn the military coup in Myanmar,” she said Friday, addressing the assembly. “And we condemn the security forces’ brutal killing of unarmed people.”

Thomas-Greenfield added that the US “will continue to provide life-saving humanitarian assistance, including to Rohingya and other vulnerable populations in Chin, Kachin, Rakhine, and Shan states.”

CPAC: Trump to return to political stage at conservative conference