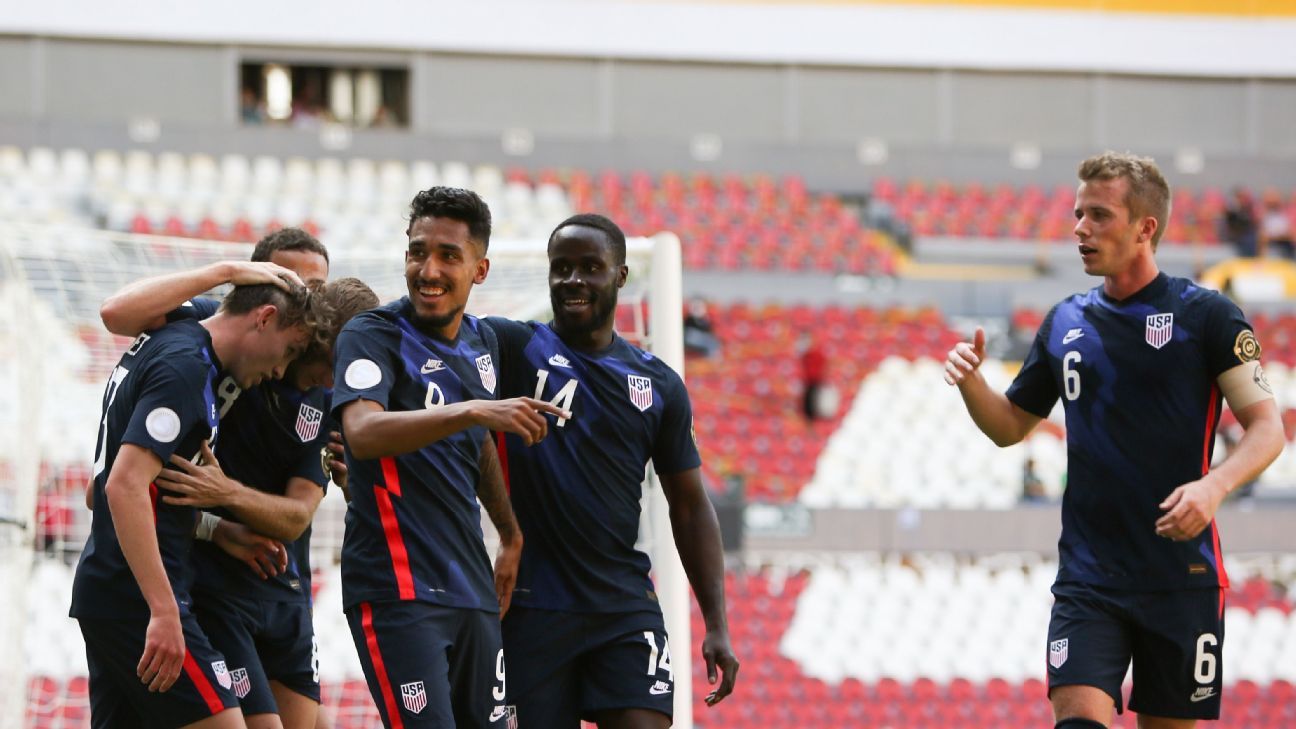 
The U.S. and Mexico renew their rivalry, this time at Under-23 level in a CONCACAF Olympic qualifier that will decide where the two countries finish in Group A and will help determine each nation’s semifinal opponent. Both sides have the maximum six points from two games and are assured of a place in the last four, with the two semifinal winners then clinching a place at the Tokyo games later this year.

The Group A winner between the United States and Mexico will face the runner-up of Group B (Honduras, Canada, El Salvador, or Haiti), while the runner-up will play the winner of Group B. Finally, in the event of two teams finishing level on points, the tie-breakers are goal differential and then goals scored.

Keep up with all the action in Guadalajara in our LIVE blog, which features analysis, social reaction, and contributions from various ESPN talent.

Please refresh the page for the latest updates.

37 MINS: The U.S. win a promising free kick and Djordje Mihailovic’s dangerous ball leads to a scramble in the box. The Mexico goalkeeper does not look as if he will be able to continue.

Looks like the Mexico keeper Malagon injured his wrist. He’s out for Jurado. #USMNT U-23s #USYNT

28 MINS: A huge let-off for the U.S.! Mauricio Pineda makes a brilliant, goal-saving tackle to deny Alejandro Mayorga, who looked to be clear in on goal after turning U.S. right-back Julian Araujo inside-out. Aruajo the most relieved man on the pitch. It stays 0-0.

20 MINS: If the US were to qualify what could a dream XI of eligible players look like? While understanding that many of these players would not be released by their clubs, here is our Jeff Carlisle’s dream XI :

Now that is a team on paper that would figure to be a major contender for a medal.

13 MINS: It’s getting physical Guadalajara as both teams have dished out hard challenges in the early stages. Amen, Janusz.

9 MINS: Another corner for Mexico, which Roberto Alvarado takes. Goalkeeper David Ochoa looked to slightly misjudge the flight of Alvarado’s cross but holds on to avoid any further danger.

7 MINS: After being pushed back initially by Mexico, the U.S. have started to grab a foothold in this match, first winning a corner and now a free kick in the attacking half.

3 MINS: And Mexico win the first corner of the match… which after a partial clear results in a long-distance drive from Johan Vásquez that fizzes wide.

9:40 PM ET: AND WE ARE UNDER WAY FROM GUADALAJARA!

9:17 PM ET: Are you ready for U.S. vs. Mexico? Midfielder Andres Perea sure seems excited for his first taste of CONCACAF’s greatest rivalry…

9:02 PM ET: And El Tri’s lineup is out… Club America’s Sebastian Cordova, the tournament’s top scorer on four goals, starts from the bench with an eye to Sunday’s semifinal.

This is the Starting XI for tonight’s match 🆚🇺🇸!!!

8:56 PM ET: In case you missed it…could some of the USMNT’s top young stars play in Tokyo if the U.S. qualify? Christian Pulisic for one has said he would relish the opportunity to represent the Stars and Stripes this summer.

“It’s something I’ve thought about, and have wanted to play in,” Pulisic said on a Zoom call with reporters about playing in the Olympics. “Obviously, I can’t control what goes on. What’s best for me at the time and what’s best for the team at the time, I obviously can’t say. But it is something that I would like to play in.”

8:37 PM ET: The USYNT starting XI is out and Jason Kreis has made six changes with Julian Araujo, Henry Kessler, Sebastian Saucedo, Andres Perea and Hassani Dotson the only holdovers from Sunday’s 4-0 win over the Dominican Republic.

Your U-23 #USMNT for tonight’s @Concacaf Clásico! pic.twitter.com/XSLYBBLTqN

Time to use our brand new jersey!!!😬😎

8:00 PM ET: It’s Matchday, as we are now less than an hour and a half away from kick-off between the USMNT Under-23s and Mexico in CONCACAF Olympic qualifying! Remember to keep it locked here throughout the evening as we follow along with this crucial Group A decider, with both sides attempting to edge one step closer to securing a spot at this summer’s Tokyo games.

‘It’s a piece of human history in a digital asset’

Some COVID-19 ‘long-haulers’ wonder about effects of vaccines