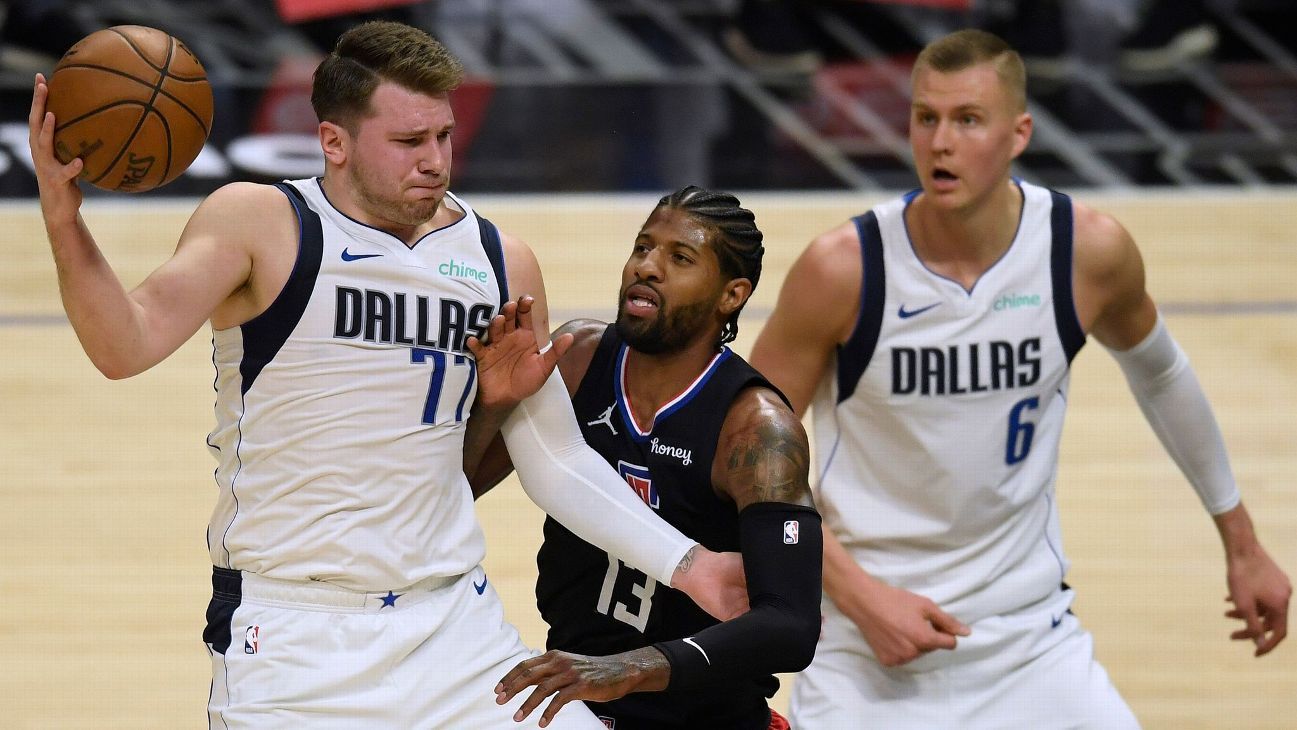 
THIS ISN’T WHAT Kristaps Porzingis expected when he arrived in Dallas.

As the centerpiece of a blockbuster trade, he anticipated forming one of the NBA’s most potent duos with Luka Doncic, a fellow rising star. Porzingis anticipated it’d be a 1A-1B sort of situation.

Doncic has certainly held up his end of that deal. At age 22, he’ll soon become a two-time All-NBA selection, and he just averaged 35.7 points, 7.9 rebounds and 10.3 assists in the second playoff series of his career.

But that happened in a losing effort, as the Dallas Mavericks fell to the LA Clippers in a seven-game series in which one of the most prominent storylines was how little Dallas relied on Porzingis, who has battled injuries and adapted to a secondary role over the last two seasons. He averaged 13.1 points and 5.4 rebounds, often utilized offensively essentially as a decoy while Doncic carved up a Clippers defense designed to slow him down.

The Mavericks are obviously Doncic’s franchise. But one of the biggest questions for the Mavs moving forward is how Porzingis fits into the picture.

“Good question,” Porzingis said after Game 7, pausing to collect his thoughts. “How do I feel? I mean, I’m good. I tried to put in the work, tried to work hard. I do my part, listen to the coaches, what I’m asked to do, and that’s it.

“I try to keep it simple for myself, so I’m not overthinking, and I try to focus on what I can control. That’s being a better basketball player, going into the offseason hungry. I want to get better physically [and] on the basketball court. I’m going to put that work in to get better, and then the rest of the stuff will resolve itself.”

A superstar of Doncic’s caliber naturally creates pressure on a franchise to compete for championships. As a result, every decision the Dallas front office makes is viewed through the prism of fitting with their franchise player.

WHEN NEW YORK made Porzingis available at the 2019 trade deadline, a Mavs team that had just drafted Doncic pounced. Dallas was confident that Porzingis would be an ideal complement and knew a commitment to extending the 2015 fourth-overall pick to a maximum contract that summer would come with a trade. Despite the fact that Porzingis had yet to play a second for the Mavs — he took a full season to recover from a torn ACL suffered in Feb. 2019 — the deal was completed in the opening moments of free agency.

Porzingis’ health and durability have been problematic for the Mavs, particularly a torn meniscus in his right knee that prematurely ended his 2020 postseason. He played in only 43 games this regular season, missing the first nine games while recovering from offseason meniscus surgery and then several more due to soreness in that knee.

After the NBA’s new play-in tournament injected new excitement into the postseason, the first round of the playoffs is underway.

Those injuries — and the resulting diminished mobility — made him a defensive liability and are among the reasons it would be difficult for Dallas to get value for Porzingis in a trade. He’s owed $101.5 million over the next three seasons, a contract that executives and scouts around the league view as an albatross.

If Porzingis isn’t a championship-caliber sidekick — and he’s not likely to be a ticket to one in the trade market — it’s hard to see how the Mavs get a second star in the near future. The Mavs plotted to have the salary cap space to chase one this summer, but the free agency class has weakened considerably with several stars signing extensions with their current teams. And signing any big-money free agent could come at the cost of Tim Hardaway Jr. Considered a salary dump in the Porzingis deal, Hardaway Jr. had an inspired 2021 postseason (averaging 18 points on 45.8% shooting from deep) and emerged as an essential player for the Mavs.

Then there are questions about the chemistry between Doncic and Porzingis. The Mavs’ franchise cornerstones admittedly aren’t friends, a distant dynamic that Cuban has compared to the early stages of the partnership between Dirk Nowitzki and Jason Terry, which ultimately produced two NBA Finals appearances and a championship.

But Porzingis has been frustrated, often feeling more like an afterthought than a co-star as Doncic dominates the ball and the spotlight, sources told ESPN. He frequently made thinly veiled references during his postgame media availabilities such as saying the “ball actually moved tonight” after high-scoring performances or stating that the offense didn’t involve him on low-scoring nights.

“It’s just the plays we were running,” Porzingis said after an April 7 loss to the last-place Houston Rockets when asked why he didn’t get any shots in the fourth quarter despite scoring 23 points on 10-of-19 shooting in the game. After a pause, he added: “Happened before also.”

A LACK OF on-court interaction between Doncic and Porzingis, who rarely high-fived or communicated directly to each other, has become apparent. Asked directly about it on April 8 after a win over the Milwaukee Bucks, Porzingis made no attempt to downplay the awkwardness.

It’s a sensitive subject that coach Rick Carlisle — who has had his own tension with Doncic, a star that has shown up his coach on the court or bench several times when disagreeing with decisions — has declined to discuss publicly. He often refers to the dynamic between Doncic and Porzingis as “evolving,” pointing out how well the threat of Porzingis’ perimeter shooting complements Doncic’s ability to create off the dribble.

The Mavs did produce some impressive numbers when that duo played together this season. They were 24-16 with a 118.2 offensive rating when Doncic and Porzingis both played. That included a 20-8 record with a 122.2 offensive rating after Feb. 5, when Dallas began its climb from 14th place in the Western Conference and five games under .500 to the fifth seed. (The downside: Dallas allowed 117.7 points per 100 possessions with Doncic and Porzingis on the floor, which would have ranked dead last in defensive rating.)

According to Second Spectrum tracking, the Mavericks averaged 1.18 points per possession during the regular season when Porzingis set a ball screen for Doncic, the most efficient duo in the league to run at least 300 picks.

That success became irrelevant in the playoffs, when the Clippers consistently defended the 7-foot-3 Porzingis with a wing with the intention to switch every pick-and-roll. They dared Dallas to feed Porzingis post-ups, which Carlisle called “not a good play” and “a low-value situation” in response to criticism last season.

Porzingis spent the series as a bystander on most offensive possessions, standing in the corner or on the wing to space the floor, getting fewer than half as many touches per game than he did in the regular season. With the stakes high, Porzingis had been turned into a max-contract role player.

“Just here to do whatever we need to win,” Porzingis said after scoring eight points on six field goal attempts in the Mavs’ Game 5 win.

After Game 7, Porzingis called it a “mental battle” to play a role that wasn’t comfortable for him. He said he tried to channel the focus from his rookie year on playing hard and doing little things to help his team.

“And whatever I do, it seems like it’s always something,” Porzingis said, acknowledging the scrutiny on him. “I just try to be as professional as I can.”

Refugee children reunited with mom at William P. Hobby Airport after being sent across US border illegally months ago